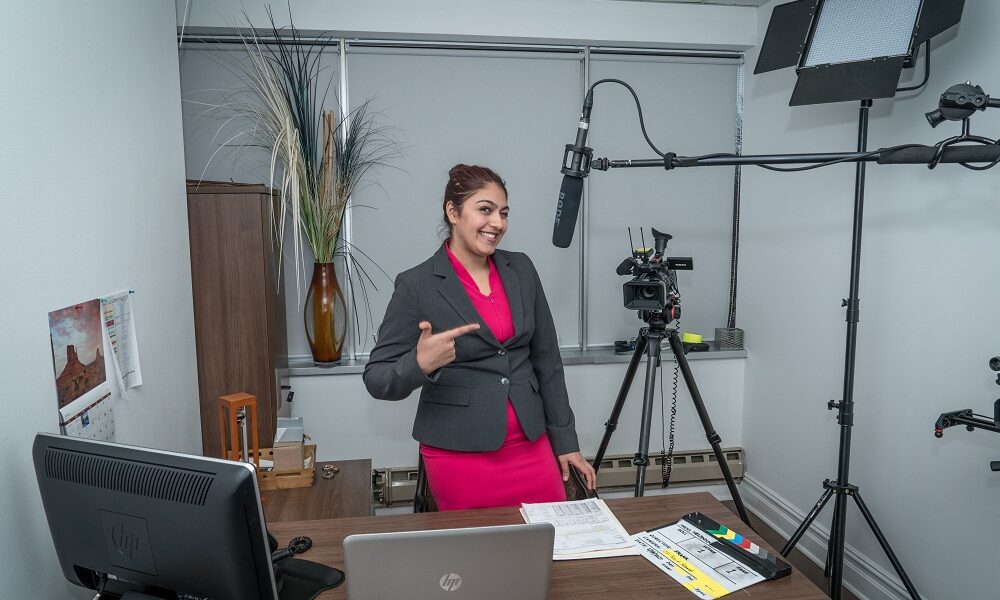 Off Cover Team : Our readers would like to know about the start of your career? What brought you in films?
Sameeksha Katyal : I am Sameeksha Katyal, I am a 24 year old Indian actor, writer & filmmaker. I have been involved as a writer, theatre director and actor in India and moved to the US in 2016 on a scholarship to study at Drexel University.I was involved with theatre, production, writing, acting as an assistant director and actor since my time in India when I worked with National School of Drama directors and worked for NDTV Goodtimes, India’s biggest lifestyle channel. My professional career in the US began in 2017 with a small role in a scene with Kevin Hart in the movie ‘The Upside’.
After that I went on to do small roles in commercials for NBC, Thomas Jefferson University to name a few and then moved to NYC where I model for a number of successful designers. In 2019, I started training at the Acting Studio in the Sanford Meisner Technique and doing off Broadway plays. I starred in the first short film in a lead role. My first filmmaking debut was also by the end of 2019 with my short film ‘U&Me’.

Off Cover Team : What, in your experience, is the most important quality in a Filmmaker?
Sameeksha Katyal : Acting & Filmmaking is a 24/7 job, inspiration is everywhere and I like to keep my receptors on. In my experience I had to mobilize my resources for getting the most optimal storytelling results but I would say I cannot be a good actor without being a good filmmaker. As a filmmaker, I understood that storytelling is incomplete without each person in front or behind the camera, also understanding the emotional life, and the best way to portray it under the given circumstance. Acting in TV& Film, Theatre is the most elaborate form of storytelling, each camera angle, look, emotion, prop, piece of clothing, language, accent comes together simultaneously to tell the story. So, being an actor and a filmmaker together helps me approach acting roles better and be a more understanding and connected filmmaker.

Off Cover Team : Tell us about your journey that got you into acting & filmmaking?
Sameeksha Katyal: Being born into a conservative family in India where the only ‘real’ careers were becoming a doctor, engineer, or a chartered accountant, I always found myself as that girl with a voice, a story to tell. I struggled to earn my place in whatever I did. Early in my growing years, I was a well-ranked Tennis champion, I practiced 5-8 hours every day to gain sponsorships and maintain rankings while working through the entire academic load. It gave my parents the assurance that I can achieve anything I work towards. Then during the Asian Games trials, I got hurt. My injury was misdiagnosed which led to a gap between the bones. Two surgeries fixed the ankle but I lost my professional sports career. My interests and talents as a storyteller came to light after I went through a journey of body image issues, self-esteem, and self-worth. I wanted to experience myself as a person and found myself at a theatre camp, I expressed there through a piece they gave me to perform and got picked by a National School of Drama director. I worked with him on multiple theatre projects as an actor and a director. Filmmaking was always a dream but became a reality once I had moved to the US and saw people realizing my talent and showing interest in working with me. My family was not sure of this as a career choice for me but they are seeing the wonderful response my projects are getting and are confident and supportive of my endeavors.

Off Cover Team : Can you tell us briefly about your short movie ‘The Interview from Hell’?
Sameeksha Katyal : The inspiration was based on personal experiences. This idea struck us in the middle of the desperate times when I was suffering long hours at work and one of my friends, Michael Chabbler, who co-wrote this script was fired and was struggling to find a job. Michael is an upcoming playwright and he wanted to express his frustration with job hunting, the standard interview Off Cover Teams, and working alongside crazy people. I loved the idea and asked him to put a draft involving our experiences. Michael wanted to make fun of it and write dialogues that only he wishes he could say in interviews. We particularly got stuck on one mocking Off Cover Team the interviewers love to ask: “Where do you see yourself in five years?” We wonder how managers in a capitalist society expect job applicants to have Five Year Plans. It’s especially absurd because we work in a world where any of us could be fired or laid off at any moment, no matter how well we are performing in our jobs, the pandemic added a new direction to the film. Yet, hiring managers expect to hear how we are willing to commit our lives to the firm. Additionally, when you work someplace long enough, you might have gone through a process to get your position. But then they hire some guy who’s completely insane. You wonder — ‘did he have to go through the same process I did?’ And there you are doing this person’s work or fixing their work, plus still doing yours and trying to be reasonable with them.

Off Cover Team : Any particular story behind the title of the film?
Sameeksha Katyal : Due to COVID everything was shut down, when I proposed the completion of this project everyone thought I had gone crazy. While my friends laughed it off, I was glad to have at least my team’s faith in me. We had a number of actors audition via zoom and skype but we did not find our Tom until we saw Michael explain the script to one of the actors. The look in his eyes as the character was so profound that we felt the script come alive.
We shot the script during COVID on a Saturday in a private office space owned by my family friends in New Jersey with 4 people in total as cast and crew. The editing and other processing of the film became impossible. We had to connect to our network of friends in editing, adding background music and spent dozens of hours finessing it to submit to film festivals. It took us 2.5 months from March to May to complete post production and the first week of June we started submitting it to the film festivals.The film title was workshopped tirelessly until I realized that a dialogue from Eve in the story best describes the film. The pandemic which then followed gave the title that interesting edge of how people are going through their own version of hell during these hard times, hence, ‘The Interview from Hell’.

Off Cover Team : Project will be presented to the audience in 2021 and yet it wins so many awards, that’s surely an achievement?
Sameeksha Katyal : We love the responses we are receiving. We experienced a great response when we read the script at different playwriting events. It seems people are feeling the fun-weirdness of our story. What amazed us was that “The Interview from Hell” was the most-watched film for 3 straight weeks at Direct Monthly Online Film Festival and was voted the winner of the Best Audience Choice Award, Public Choice award & Best Short Film at different festivals. We are still nominated for awards at a dozen international film festivals. This is unexpected and exciting and I personally have so much gratitude for everyone who is taking the time out to watch and vote for our short film. 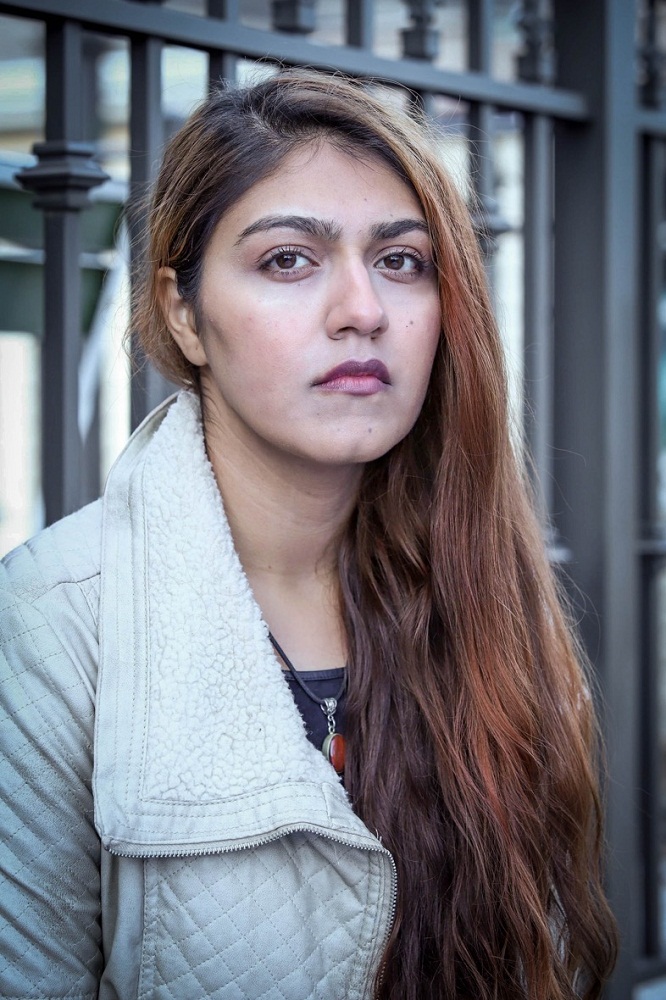 Off Cover Team : You seem to be getting into the habit of winning awards as your 2019 production ‘U&Me’ is going to be on Amazon TV and other top platforms. What makes your films different?
Sameeksha Katyal : As a female & person of color, I believe it to be my mission to give opportunities to actors like me and to encourage more girls and people of color to take on those challenging roles in the entertainment industry, getting those important roles and breaking the stereotypical type casting. I had to work multifolds harder to get recognition for the work than my peers in the industry. I believe in leading by example and use my social media and other platforms as a guide to empower girls and young women who want to pursue a career in acting & filmmaking in Hollywood. My brand is all about strong, independent women and their empowerment, and I have carried the same message throughout my acting roles and filmmaking endeavors.

Off Cover Team : If you could pick one scene you did, that you could relive again, because it had such an impact on you, which one would it be?
Sameeksha Katyal : All my acting experiences have been unique and memorable but one that I will remember forever wasan off Broadway Festival. I performed as the lead Dorie in the play “Tell Dorie not to cry”, and on stage, I could feel the power of the performance with a change in energy of my audience, I could feel the complete silence and hear the sniffles of my audience. After the performance I had a number of people walk up to me to hug me and tell me they felt some memories re-lived during the performance. It warmed my heart to just think I connected with these people through my performance. It is my biggest pride as an actor. My acting teacher saw the play and he said, he had never seen me live as alive as he saw in the performance.

Off Cover Team : If you could change something about your life or give up in an instant, what would it be?
Sameeksha Katyal : I don’t think I’d like to give anything up. I have lived a wonderful life and I am proud to say that I am a product of my experiences in life.
Being bullied, body shamed as a young girl, experiencing loss, failure, eating disorders and low self esteem made me learn to fight those negativities in my environment. It has made me more compassionate and a person of character who stands up for what is right. This I believe has made me into a strong person, and helped me discover my voice and mission in life. 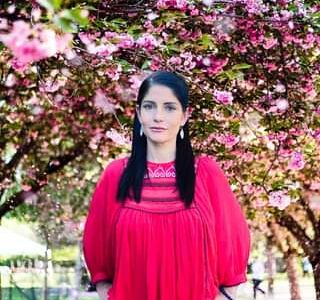